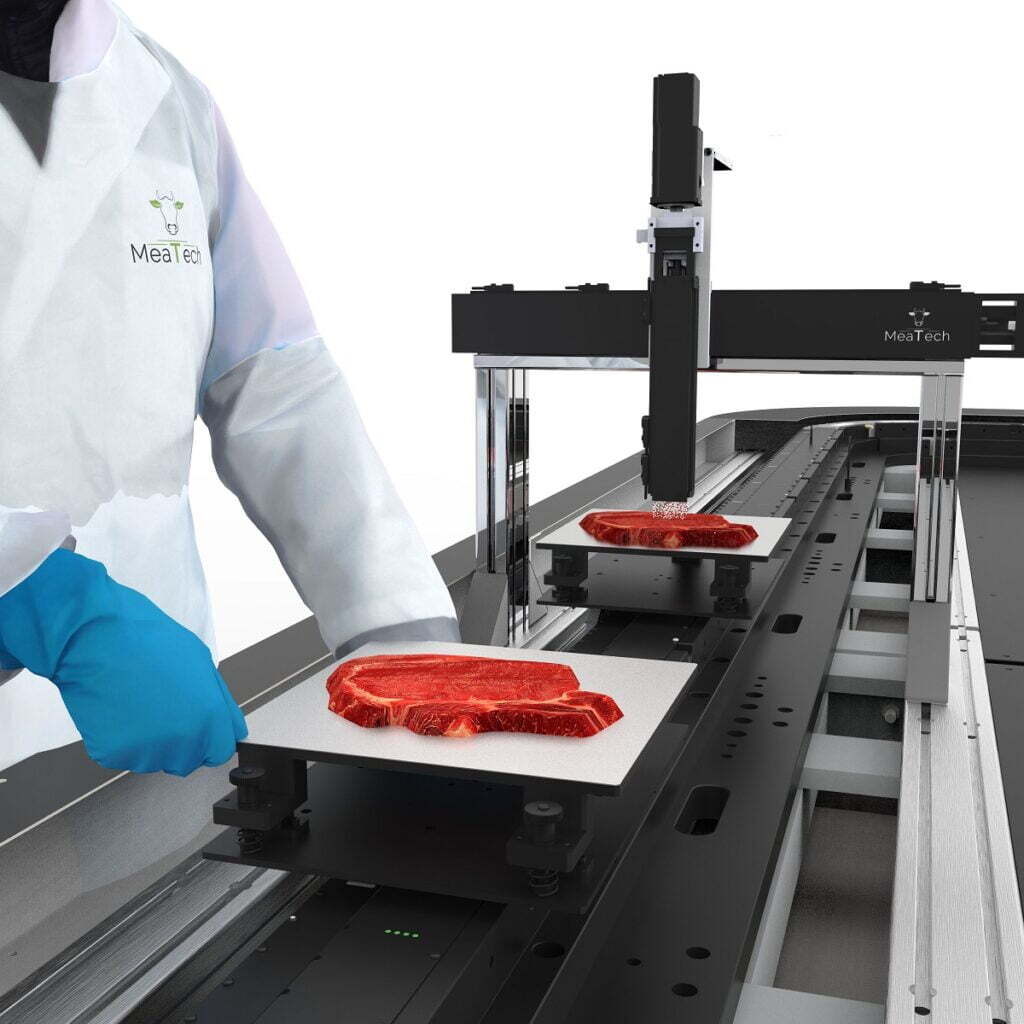 Day by day, the meat sector is trying to getting controlled and sustainable. In some studies, muscle tissues are enlarged in the laboratory and in some studies, the taste and texture of the meat is simulated.

Giuseppe SCIONTI, founder of Novameat company, has completed his doctorate in tissue engineering. During this period, he made improvements on skin tissues, cartilage and bones. In 2016, he founded Novameat in order to combine his developed technology with environmentally oriented food production.

In his works, he produced beefsteaks from different plants like peas to seaweed, using 3D printer technology.

SCIONTI develops non-meat foods by adding protein powder to the combination of rice, peas and seaweed.
First of all, dough is prepared from various herbal materials. By using CAD software, the process and model that will turn materials into ‘meat’ are designed. The dough is pushed into a 3D printer with a syringe, and then into a long micro filament that will be shaped into a steak. Produced from herbal ingredients, the paste has a texture similar to the original steak. Then the printer turns this material into a steak. About a quarter of raw steaks (150 gr) are produced in less than an hour.

So what is the importance of the 3D printer at this point?

The way and method of producing steaks of 3D printer is very important at this point. The 3D printer produces thin steak dough threads by the cross-over bond method. With this method, the herbal dough that rises layer by layer imitates the combinations in muscle cells. Naturally, it imitates the structure of the meat. Experts say that the product obtained with this strategy is chewable, stretchable and evaluable in terms of pressure resistance.

Meat consumption is increasing globally. However, the resources consumed by growing, carrying and storing meat are much more than the environment can handle. Besides, of course, meat production of vegetable origin does not require animal slaughter, it does not harm the environment. It is also very important to be sustainable in meat consumption. That’s why prefer to work with proteins and amino acids from rice and peas. For example, it does not use avocado and quinoa consciously because the consumption of imported products negatively affects the process in terms of sustainability.
SCIONTI works with the best chefs in the world. It is constantly improving the 3D meat of plant origin that it is developing to be both sustainable and delicious. In his recent work, he is making improvements to add Omega-3 to ‘meat’ content.

3D meat can be the ‘super’ natural meat of the future.